Homepage > About Us > History

Berlin Metropolitan School is the oldest and largest international school in Berlin Mitte. BMS enjoys a very interesting past and, more importantly, a promising future.

BMS was founded as a private school in the former East of the city in 2004. In its early years, the school was housed in various spaces in the area between Schönhauser Allee and Friedrichstrasse. In summer 2006, BMS moved into the building where the “Mosaik” school in the block between Torstrasse and Linienstrasse was formerly located. At that time, 60 children were enrolled at BMS. At the end of 2006, BMS changed hands in close partnership with the parent initiative. The school’s profile changed from being a bilingual school, which promoted gifted and talented students, to becoming an integrated Secondary School with an international IB profile. In the same year, the guiding principles for BMS were established:

After lengthy negotiations with the Berlin state government in 2007, the BMS school grounds and buildings were acquired by the school. In the following years, extensive investments were made to develop the school into a modern learning environment. In 2016, BMS was able to acquire a school building in the back courtyard of the campus, which currently is unrenovated and offers extensive space for future school development.

In 2021, an extensive building project was realized and completed under the artistic direction of the architectural office of Sauerbruch Hutton. The goal of this project was to create modern learning spaces, 2 school libraries, an auditorium, as well as a rooftop terrasse.

BMS school development happened organically and was successfully completed in 2016 with the inaugural graduating class of 2016. Since the first graduating class, 50 students on average apply each year for university entrance around the world.

Due to our steady growth and the sustainability of our school program, BMS now holds the status of one of the most successful school start-up projects in Germany.

Currently more than 1,100 students from 69 different nations attend our school. An international team of 200 teachers and educators lead the way for the learning success of our students. Silke Friedrich has been the Executive Director since 2007. In 2009, the management structure was expanded into its current form. 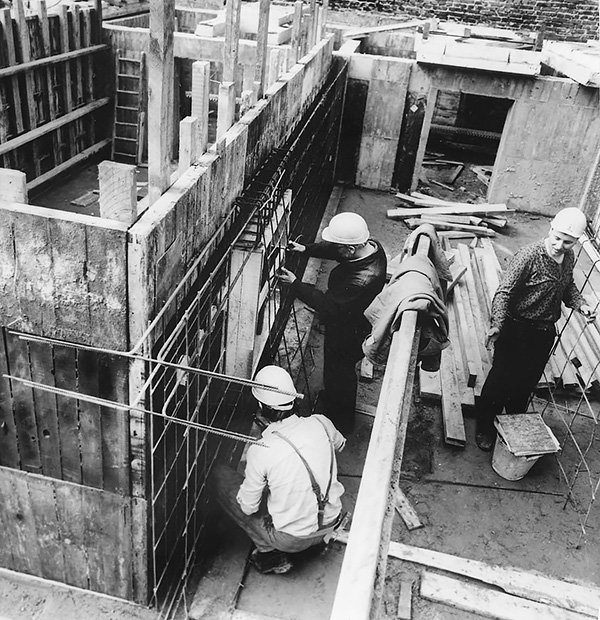 The construction of our original school building.